"Rivera is the air the Yankees breathe. He's a necessity. Without him, the Yankees die. (Joba) Chamberlain is a luxury."

Mariano makes front and back cover of NY Post, Back Cover of Newsday, 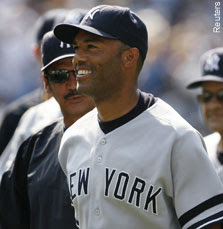 After striking out the side in Toronto with only a 1-run lead, 24 hours after a 4 out save. This photo from the NY Post.

August 7, 2007 -- TORONTO - "Mariano Rivera's Hall-of-Fame career doesn't require additional validation. He won't need more than one ballot to enter Cooperstown. Yet, how he pitches across the final eight weeks of the season will play a colossal role in the Yankees reaching October or going home early.

"He is amazing," winning pitcher Andy Pettitte said of Rivera, who notched his 18th save in 20 tries. "He is throwing hard and his ball is cutting again with command.

Mariano in context by a poster to Lohud Yankee blog

We aren’t suggesting that Joba is the next Mariano.

What many of us are saying is that Joba has certainly dominated minor league players. If that isn’t a meter of possible success in the bigz, than nothing else is, and you might as well never ever promote a player. Our starting pitching is almost as good as anyone’s and we have the number one offense in baseball currently. Our pen is in shambles however, and there is no place to go but up. If we are to make a legitimate playoff push, we need help asap. By not acquiring Gagne, Cash placed a huge vote of confidence in his youth. He needs to act accordingly. I hope to see Joba up by Monday." (posted 8/05/07)