Mike Lupica has said it before, Mo leaves every other pitcher in the history of the game in the dust. Lupica of course sees a "pitcher," not just a 'total save stat'....
From NY Daily News column by Mike Lupica, "Joe Torre Still Needs right Supporting Cast in LA," 10/31/07, mentioning Torre's cast in New York.


(The LA Times wrote an article about Josh Beckett, saying he now has a 1.73 ERA in 72 2/3 innings in 10 career postseason games. At the end of the article it mentions:
From article by Mike Digiovanna, LA Times, "Beckett is the Boss of the Post Season," 10/25/07

"I always will believe that during the 1996-2001 dynasty, Mariano Rivera was the only uniformed member of the organization more important to the Yankees' success than Torre. They could not have won so much without him, and it remains to be seen if any Yankee manager can ever be as successful or as adept as Joe Torre."

"It's still unclear whether Joe Torre will survive a seventh straight postseason without bringing a World Series title back to the Bronx, but the chorus of support he received in recent days has been staggering.

You had prospective free agent Mariano Rivera,
saying he didn't understand why the Yankees were even considering making a change. Rivera added that his decision on whether to return to pinstripes next season could be affected greatly by whether Torre remains as manager.
From Mike Berardino's South Florida Sun-Sentinel column, "Torre Has His Backers," 10/14/07

"If Joe Torre is spared next week in Tampa, pulled from the public choke hold George Steinbrenner slapped on his career, the reliable people at the Elias Sports Bureau will be busy addressing this precedent-setting question:

It would be the 35th postseason save of Rivera's remarkable career, and the first to be recorded after the Yankees were bounced from the tournament.

At the end of a wild and crazy week even by Bronx-Is-Burning standards, this is what I'll remember most:

Without a contract to cover him for next season, without a captain and shortstop around to watch his back, Rivera walked into his clubhouse the other day and acted like Torre had just handed him the ball to start the ninth.

He threw his nasty cutters, staying true to his core. Rivera said he might not re-sign with the only franchise he's ever known if his manager isn't re-signed, too.

Sure, other Yankees have expressed their support for Torre in the days following the AL Division Series loss to Cleveland. But Andy Phillips and Doug Mientkiewicz aren't first-ballot Hall of Famers, and the teammate who is, Roger Clemens, can say whatever he wants from the manicured sanctuary of a faraway golf course: He's almost certainly done as a Yankee.

So nobody was surprised when the likes of Phillips and Mientkiewicz were left to field questions in the Bronx they shouldn't be fielding, while Jeter, the captain, was holed up somewhere in Manhattan, doing whatever princes of the city do.

"I don't feel good about it," Rivera said of the very real possibility Steinbrenner could take Torre's job. "I don't see why they're even thinking [about it]. I wish he's back, definitely. If you ask me what I would want, I want him back.

"The thing is that I don't see why they have to put [Torre] in this position."

Asked if Torre's status would determine whether he wanted to remain with the Yankees, the closer said, "It might do a lot of it."

Rivera's comments made big news, which was fitting: He's always been the subject of more stories on the days he doesn't pitch.

His near-silent grace is part of that equation, too. Rivera would be the last of the Yankees to bluster his way onto the front or back pages of the city tabs; it's not the way he was raised.

His pride wounded, Rivera wanted everyone to know that he would listen to all offers and that the Yankees wouldn't be getting any hometown discount. Deep down, nobody truly believed him. The consensus has Rivera retiring a Yank.

Rivera won't buckle, anyway; he didn't save 443 regular-season games (477 including postseason, sm) and help his team to four World Series championships for nothing. He's a man of conscience over cowardice, substance over style.

Rivera has weathered everything from the Sandy Alomar Jr. homer to the Luis Gonzalez bloop to the historic collapse of 2004.

"The special ones like Mo," Torre said, "respond to every test."

Will the manager somehow survive to see opening day, 2008?

P.S. Mr. O'Connor, as on target as your words are, whose fault is it that Rivera has been "under-covered" for 13 years? You've been in a position to do something about it within the BBWAA but haven't--I've seen the voting results, especially from the 2005 awards. You put out a nice column after that travesty as well, but if anything, Rivera's recognition from BBWAA voters got worse. 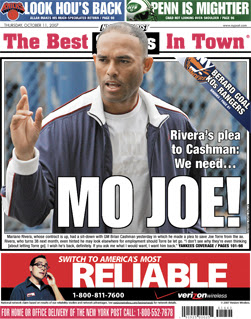 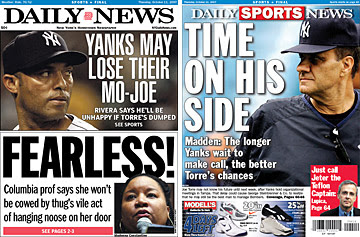 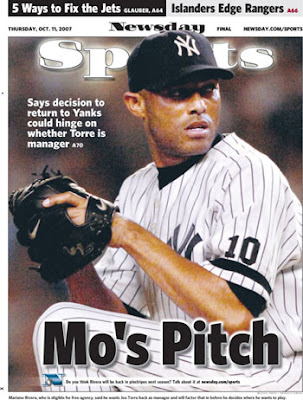