Rivera wasn't in the building for this World Series-Madden

.
10/29/11, "For all those disenfranchised Yankee fans this postseason, the specter of the Ranger relievers blowing the save three times in Game 6, was just
and what he meant to all those World Series championships."...

.
10/25/11, "Over the last five years only two relievers have averaged more than two wins above replacement; one of them is the greatest closer of all time
the other is Jonathan Papelbon. This can be read two ways: 1) Relievers in general are not that valuable (and are often overpaid), and 2) relievers are volatile and struggle to stay significantly above replacement for an extended period."...
(Including the words 'regular season' regarding stats that are so wouldn't take much extra work and would end the relegation of a massive body of work to the trash heap. ed.)

.
10/24/11, "Jonah Keri is writing a book about the Montreal Expos, and he has a nugget that is quite interesting. Before the Expos accepted an offer from the Red Sox for Pedro Martinez the Yankees offered Mariano Rivera for the flame throwing righty. Wow."

"Cincinnati Reds’ scout Donald Titus said he likes to watch Yale play because the team has a history of producing good pitchers. But on their way to repeating as City Series champions, the Bulldogs produced on both sides of the ball.

Not even a surprise appearance from New York Yankees all-star closer Mariano Rivera could steal the show from the Elis on Sunday as they defeated the University of New Haven 7-3 to win the championship the day after they knocked off Southern Connecticut State, 5-0.

The Bulldogs’ pitching staff dominated both games, allowing only three runs while striking out 19 batters in 18 innings of work....The team opens its spring season on March 3 in Blacksburg, Virginia, where the Bulldogs will face-off against the Virginia Tech Hokies."

Not my favorite Mariano Rivera comparison...Chris Christie by Ann Coulter

.
This isn't my favorite Mariano Rivera comparison but I include it for the record. I'm glad Chris Christie was elected in NJ, but don't see him as president as Ann Coulter does:

Valverde: 'I don't know how Mariano does it.'

Valverde buckled under the pressure later Wednesday night to give the Rangers a thrilling 7-3 victory in 11 innings and put the Tigers one loss away from elimination."...

I understand Mr. Valverde is described as being 'perfect' and having had a 'perfect year,' and he did have a great year. Perfect isn't a 2.24 ERA, 4 losses, 5 home runs, and never pitching more than 1 inning. It's very good but not perfect. He beat the Yankees in the ALDS in 2 close games, so he has bragging rights if he chooses them. Permanently attaching the word 'perfect' to a player based on the 'regular season total save stat' alone isn't really helpful to him or anyone else. ed.

Labels: Valverde: "I don't know how Mariano does it."

The plight of the Indianapolis Colts? Simple.

They lack a Mariano Rivera mentality. They can't close. Not a lick.

The Colts are saddled with their first 0-5 start since 1997 because of a maddening inability to adequately finish what they've started. The latest and most damning example: blowing 17-0 and 24-7 first-half leads and being

It doesn't take a Rhodes Scholar to detect a common thread.

"The reality is that's what's happened," Colts center Jeff Saturday said Monday afternoon. "You can cut it how you want, but we haven't finished....

"There's no secret to football," he said. "You have to make enough plays 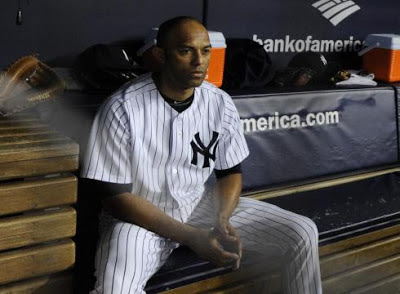 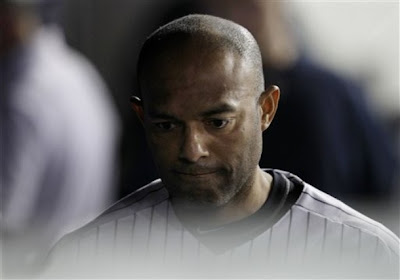 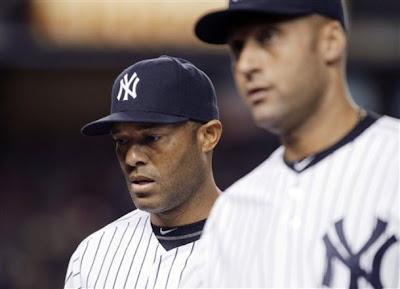 Above, ALDS game 5, Oct. 6, 2011, Yankees Arod, Jeter, Girardi, Russell Martin looking to the bullpen as they wait for Mo, getty

About top three photos: Top, Rivera in dugout after pitching 9th, R. Deutsch. Next, Rivera in the dugout during 9th inning ALDS game 5, ap. Third, Rivera and Jeter leave the field after Mo pitched in the 9th, Oct. 6, 2011, ap.

Ed. note, 10/13/12: I normally have information about pictures right next to them for easy reference, but blogger has recently changed its blogging format. When I added a picture to this post blogger deleted another picture I had in the post from Oct. 2011. I had to find the picture again and re-post it. Blogger wouldn't let me keep this source info near the pictures, every time I tried to put it there it erased a picture. I originally had the top 3 photos aligned correctly, but the new system won't allow it in this case. When I try to align them now it erases a picture.

ALDS Game 1B at the Stadium

Top, Rivera gets K with bases loaded, final 9-3, Betemit at the plate, ap;
This game was the completion of ALDS 1 which began 9/30/11 but was suspended due to rain.