At the Stadium October 25, ALCS game 6

At the Stadium, ALCS game 6 rainout

The difference-maker, of course, is Rivera. And regardless of what the Yankees do for the remainder of the series,
Down a run, Chamberlain entered in the eighth. He gave up a double and a one-out infield single to Aybar, who then stole second base. Needing to keep the deficit at a run, with runners on second and third, Girardi called on Rivera, who hadn't given up a sacrifice fly all season. Figgins hit a soft liner to right and Abreu flied to end the inning....
by Howard Bryant, "Moves Making ALCS More Interesting," 10/23/09, ESPN.com 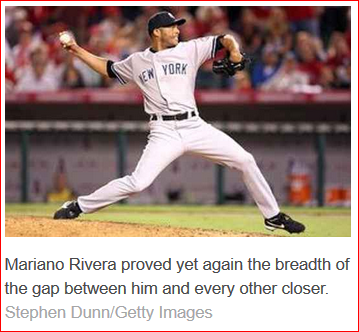 the Aaron Boone game, the last time the Yankees played themselves into the World Series.

He knew and Rivera knew and the Yankees knew Sabathia would be expected to pitch more than three innings last night. And he did. He sure did. The Yankees would give him a lot more stick than he needed in the baseball home of those annoying thundersticks. ...Try to remember the last time you trusted a Yankee ace starter such as this at this time of year.

ALCS game 3, game tied 4-4. Mo entered the game with the winning run on 2nd. He made a throwing error to third on a bunt. Eventually bases were loaded with no out. Rivera got out of it with no runs scoring. Ground balls never left the infield. A sac fly would have won the game. The Angels did win in the 11th after Mo was gone. "Mariano Rivera is a flat-out stud," by Kent Sterling, Indy 1070 the FAN, ESPN.

Mo goes the distance in regular and postseason- NY Post

"The last time Mariano Rivera pitched more than two innings in a game was more than three years ago. It wasn't a problem for him to do it again last night.

in last night's incredible ALCS Game 2 victory for the Yankees. In their 4-3 13-inning win, Rivera logged 2 1/3scoreless innings, going beyond two innings for the first time

Last night, Rivera was summoned in the eighth with men on first and second and two outs and Erick Aybar at the plate. The legendary closer, who had a feeling he'd be called on face Aybar if the situation presented itself, proceeded to retire the Angels shortstop on a groundout to second.

Labels: Mariano goes the distance in regular and postseason-Hale

At the Stadium October 16, ALCS game 1

CLOSING THE DEAL IN OCTOBER

Jeff Passan: "While Games 1 and 2 were won by nearly $250 million in mercenary arms – CC Sabathia(notes) and A.J. Burnett’s(notes) – Pettitte carved up the Twins in Game 3. And Posada hit the go-ahead home run in the seventh inning. And Jeter made a brilliant defensive play the next inning, catching Twins runner Nick Punto(notes) taking too wide a turn around third base, relaying the ball to Posada and watching him gun down Punto at third.
Only one other pitcher has thrown in that many postseason games, period.
Pettitte, Posada, Jeter, and Rivera... "have spent parts of 57 seasons with the Yankees, only Pettitte’s three-year vacation with Houston interrupting 15 unabated years. Each debuted in 1995, and never before or since has a team seen such greatness in a single wave: two no-doubt Hall of Famers and two borderline, as much for their team accomplishments as individual....
"Familiar Faces push Yankees to the ALCS," 10/12/09, Passan, Yahoo.
Pettitte photo by ap. Reference to Dynasty by Ryan Fagan in his article on SportingNews.com, 10/11/09, "Like Old Times: Yanks Old Guard Pivotal in Win"

At the Stadium October 7, ALDS game 1


"At the beginning of another October for the Yankees here is Derek Jeter talking about the great Mariano Rivera. In another time in New York, it would have been Willis Reed talking about Clyde Frazier:

"People like to say Mo's always the same, that he never changes. And they're right. But here's something else that doesn't ever seem to change, especially the longer he goes.

"You want to know how great he really is?

October again for the Yankees. That means it is Rivera's time. And maybe because the Yankees will have to go all the way to November if they are going to win what would be the fifth World Series Jeter and Rivera have won together - and because this is the November when Mo Rivera will turn 40 - people are talking to him and about him for more than the occasional blown save now.

He has done what he has done, at such an amazingly high level for such an amazingly long time (at least for a power closer), with such a cold-blooded and ruthless efficiency, that any kind of failure, even in a meaningless regular-season game - a walk-off home run from Ichiro a few weeks ago - is still a shock to the system of the Yankees, and their fans. It will be that way with any playoff failure from Rivera, if there even is one this time, if anybody manages to lay a glove on him.

No one would ever suggest that you could take Rivera for granted. It is hardly as if he has been unappreciated, that his talent and grace have somehow been overlooked since he first became a big pitcher for the Yankees in 1996
Still: It has taken another transcendent regular season from him to make us appreciate what a transcendent talent he has been for such a long time, on either side of 161st Street.

And is still here. If this goes the way it is supposed to for the 2009 Yankees, the ball is in his hands for the next Yankee World Series the first week of November, as the Yankees finally win No. 27, do it across the street this time....

Put it another way:

"Think about what it will be like when he's gone," former Yankee manager Buck Showalter said on Friday.

"You look around baseball," Showalter said, "and everybody has closer issues eventually. Everybody except the Yankees. Closers come and go. Except Mo never goes anywhere."

On the field, Mo really is the same, night after night, game after game, season after season: No change of expression, just more broken bats, just the constant grand sight of him elevating his fastball when he wants to or has to, three more outs in the ninth, one more save.

This is the Rivera who still says Dave Roberts was out stealing second in the ninth inning of Game 4, Yankees against the Red Sox in 2004, the beginning of the end even if nobody knew it at the time. This is the Rivera who will smile and shrug and show you, an imaginary glove on his hand, how close he was to gloving Bill Mueller's game-tying single after Roberts did steal second.

Maybe that is the true measure of Rivera's genius, what a sure thing he has been for so much of his career, but especially in October: We remember the ones that got away with as much clarity as

Sometimes you think: If he doesn't give up the home run to Sandy Alomar in Game 4 of the ALDS in 1997 … if he gets out of it against the Diamondbacks somehow … if he doesn't walk Kevin Millar to start the bottom of the ninth in Game 4 in '04 … then maybe he has won seven World Series already with the Yankees.

Then I asked Morgan this question: Is Rivera better at what he does than any pitcher who ever pitched?

We come into this October talking about Mo Rivera, more than ever, certainly more than he ever has about himself. But looking for more of the same from him. There have been other home run hitters.