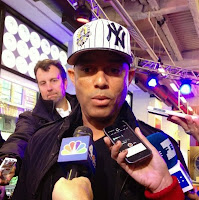 "It may be hard to imagine retired Yankees closer Mariano Rivera going about his business in the same flashy, emotional way Alex Rodriguez has the past several days.

But Rivera professed support for his embattled former teammate and said he would have defended himself if a similar situation had ever developed.

"I would have done it, too," Rivera said Thursday during a ceremony in New York City to re-name 4th and Broadway "Mariano Rivera Way" for one day. "Everybody has to defend themselves. In a situation like that, it's hard. We're still human beings.

"He has a right to defend himself, that's all I can tell you."

Rodriguez is currently embroiled in a battle with Major League Baseball, which has levied a 211-game suspension against the third baseman for his alleged involvement with performance-enhancing drugs connected to the Biogenesis case. Rodriguez took his plea to the public on Wednesday, appearing for a lengthy interview on WFAN, where he declared his innocence. 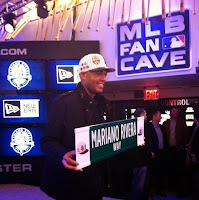 When it came to another of his friends, free agent Robinson Cano, Rivera offered advice but not a specific appeal to remain with the Yankees.

"I hope that whatever decision he makes, he will be happy -- for him. Not for anybody else, but for him." 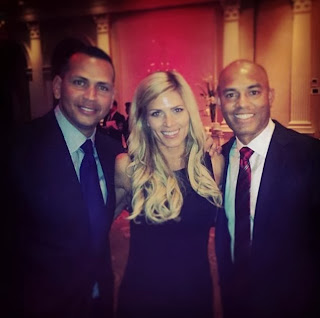 "This is pretty cool. Mariano Rivera has talked about wanting the Yankees to play an exhibition game in his hometown of Panama City, Panama and now it’s happening.

Mark Feinsand of the New York Daily News reports that the Yankees will play two exhibition games against the Marlins in Panama on March 15 and March 16.

Should be a great scene, with Rivera no doubt being part of the festivities. And maybe Yankees manager Joe Girardi can give him a last-minute “come out of retirement, please” sales pitch." via btf

"This is pretty cool. Mariano Rivera has talked about wanting the Yankees to play an exhibition game in his hometown of Panama City, Panama and now it’s happening.

Mark Feinsand of the New York Daily News reports that the Yankees will play two exhibition games against the Marlins in Panama on March 15 and March 16.

Should be a great scene, with Rivera no doubt being part of the festivities. And maybe Yankees manager Joe Girardi can give him a last-minute “come out of retirement, please” sales pitch." via btf

"Mariano Rivera has some clout. Does he have enough to bring the Yankees to Panama? Honored at last night’s 19th annual Lou Gehrig Sports Awards Benefit Dinner, Rivera brought up the idea of playing a spring exhibition game in his home country of Panama. And he says it could happen as soon as 2014.

“We’re trying to make it happen, but right now, it is not confirmed,” Rivera said. “Hopefully it will happen quickly, because we want to do it. I want to bring them back to my country and give the people in Panama a great time with the Yankees. So hopefully we can do it.”

A few other Rivera comments from last night, as passed along by MLB.com…

On winning Comeback Player of the Year: “You know, when you talk about a comeback, it’s not such a good word, because you know that something happened. Either you didn’t do good, or something happened to you. The previous year, I didn’t like to remember that. It was a sad time for me. But it motivated me, pushed me to finish the way I finished. If that didn’t happen, it wouldn’t have been the same.”

On Dave Robertson as a ninth-inning replacement: “That would be my guy. But definitely, when you start a new job, it’s different. He’ll have to be patient. I believe that he could be the guy. … The transition is mentally. You have to be ready mentally. When it happens, you have to be able to flip the page and move forward.”

On the Red Sox winning the World Series: “They deserve it. They played better than anybody. They played to a different level. That’s why they are the champions. They were capable of doing that; they deserved to win.”

On being honored by the ALS Association: “It means a lot for me to be here. Sometimes we complain. Sometimes I did complain when I would blow a save. When I see this, I have to reach out and say, ‘I’m sorry for being selfish sometimes.’ … Seeing this, it’s something we all have to help, to share what the Lord has given us with others less fortunate and those in need.”" 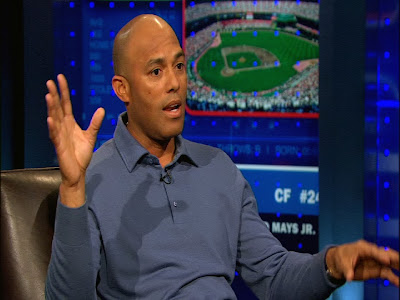 "Mariano Rivera refused to let torn knee ligaments at age 42 end his career, instead returning for one final season in 2013. In doing so, Rivera not only managed to end his legendary 19-year tenure on his own terms, but reinforced his status as the most dominant closer in Major League history during the process. For his impressive comeback campaign this summer, Rivera on Monday night was recognized by his peers at the MLB Players Choice Awards as the American League Comeback Player of the Year, edging out fellow nominees Scott Kazmir (Indians) and Victor Martinez (Tigers). Rivera was similarly named Major League Baseball's officially sanctioned AL Comeback Player of the Year, as voted on from a list of finalists (one per team) by MLB.com's 30 club beat reporters.

At the same time, he was honored for more than just his impressive comeback season. Rivera on Monday night was also named the Marvin Miller Man of the Year, an award given annually to a Major Leaguer "who inspires others through his on-field performances and contributions to his community." Other finalists included the Cardinals' Carlos Beltran and the Mariners' Raul Ibanez.

"Without my peers, I wouldn't be the same," Rivera said on MLB Network during the Players Choice Awards announcement show. "I definitely appreciate what they have done for me, choosing me and voting for me."

The recognition only further cemented for Rivera what was already an incredibly successful farewell tour, and one that even he would have had a difficult time envisioning just a year and a half ago.

Originally expecting to retire following last season, Rivera's plans all changed on May 2, 2012, when he collapsed in center field at Kauffman Stadium in a freak incident during batting practice. Rivera suffered a torn ACL and partially torn MCL while shagging fly balls -- something he had taken joy in doing his entire career -- and the closer was left wondering if he'd ever again toe a Major League mound.

After missing the rest of 2012, he returned for a final year, declaring this season would be his last before it even started. He went on to dazzle one final time, finishing with a 2.11 ERA and 44 saves over 64 appearances, marking the ninth time he surpassed the 40-save plateau. He finished the season with 54 strikeouts in 64 innings, while walking only nine batters.

Rivera showed zero lingering effects from the gruesome knee injury, tallying a 1.83 ERA and 30 saves prior to the All-Star break. Needless to say, he earned his 13th and final All-Star nod, setting the scene for a memorable All-Star Game moment at Citi Field, the home of the crosstown Mets.

Rivera entered in the eighth inning to his typical "Enter Sandman" entrance song and a rousing ovation from the crowd. The rest of AL All-Star teammates delayed their taking of the field behind Rivera, keeping the spotlight solely on the legendary closer as players and coaches from both teams joined in the standing ovation.

Rivera went on to pitch a scoreless frame and earn his first career All-Star Game MVP Award. The accomplishment was just the latest in a storied career that included five World Series titles, a 1999 World Series MVP Award and an all-time record 652 saves, among countless other honors.

As for the Players Choice Awards, they have been distributed annually since 1992. This year's crop of winners each had the added honor of designating charities to receive grants totaling $260,000, from the Major League Baseball Players Trust, which raises funds and attention for issues affecting the needy and promotes community involvement. Rivera announced that his $70,000 worth of grants from his two Players Choice Awards would be donated to his church, Refuge of Hope." image from mlb.com, "Mariano Rivera talks about winning both the American League Comeback Player Award and the Marvin Miller Man of the Year Award"

I noticed this ad on NY Times Sports web page 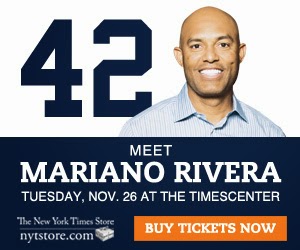 Comment: I didn't realize the NY Times had a store. 241 W 41 St. The event costs $350. but you get a signed ball. I have a couple myself which I wouldn't part with for any price.