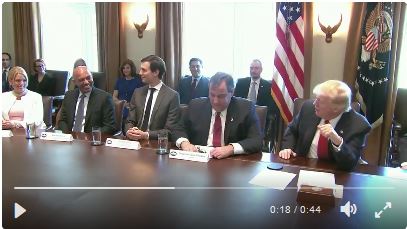 3/29/17, "Mariano Rivera introduces himself at WH opioid event and Trump quickly jumps in: "Oh they could use you now! I think you'd make $100M/yr now!"" Steve Kopack‏Verified account @SteveKopack Mar 29

Right to left, Trump, NJ Gov. Chris Christie, Trump son in law Jared Kushner, Rivera, and Fla. AG Pam Bondi (per her name card on the table): "President Trump has appointed Florida Attorney General Pam Bondi to a commission to help fight opioid abuse on a national level....In a statement, Florida’s Attorney General thanked the President as well as New Jersey Governor Chris Christie—who will chair the panel—for caring about what she calls “a deadly epidemic,” adding thousands of Americans die each year from drug overdoses."

"Former Yankees great Mariano Rivera was summoned to the White House on Wednesday. (No word on whether “Enter Sandman” played when Rivera stepped into the West Wing.) Rivera, who retired after the 2013 season as baseball’s all-time saves leader (652),"...

[Ed. note: Rivera also had 42 post season "saves" over his 141 grueling post season innings for an actual "all time saves" total of 694. His 141 post season innings amount to an additional two years of relief work at 70 innings per year, sandwiched within the calendar years of his regular season stats but not mentioned in this article. It may be technically correct per MLB rules to continue to omit Rivera's post season work when reporting the "all time saves leader" stat, but why would you want to? Why would you want to cheat anyone out of a vast body of work? Why not at least change the name of the stat to something other than "all time" since "regular season only" isn't "all time?" Rivera pitched into November twice, 2001 and 2009. Shorter off seasons meant less time recovering while other relievers were sitting on the couch resting up to pad the next year's regular season stats.]

(continuing): "was in Washington D.C. for a listening session on Trump’s newly created opioid commission. New Jersey Gov. Chris Christie, a devoted Mets fan, is leading the group, which was created to fight a growing opioid addiction problem in the U.S.

Rivera is a philanthropist these days and leads the Mariano Rivera Foundation, which supports community-based organizations. The group specifically focuses on education, health and social and economic development, according to its website, marianoriverafoundation.org. One of its biggest projects to date was renovating a church in New Rochelle, N.Y., in 2014.

Trump steered the conversation to baseball when introducing Rivera but offered no specifics on what role the closer might play on the committee.

“Oh, they could use you now,” Trump said of the Yankees. “You know, I think you’d make $100 million a year right now…I watched for many years, Mariano. I’d sit with George (Steinbrenner), and George always felt good when Mariano was throwing.”"  "The Associated Press contributed to this report."

"Mariano Rivera, the New York Yankees’ all-time great closer, made a trip to the White House, where the thoughts of a president who happens to be a big league Yankees fan turned quickly to his other passion: deals. The number President Trump was thinking of? $100 million. Yowser.

That’s one way to break the ice. Rivera, who was representing his foundation at an opioid-awareness discussion that also featured Yankee fan/Gov. Chris Christie (R-N.J.), [NJ has many Yankee fans, but Gov. Christie is a Mets fan] had just introduced himself to the assembled group when Trump couldn’t resist.

That brought a smile to Rivera’s face and laughs around the table. Trump went on to reminisce about the times he spent with the team’s late owner, George Steinbrenner, and how Rivera always delivered.

“He threw the heaviest pitch,” Trump said. “You made the ball like it weighed 30 pounds.” But…back to that $100 million deal.

Trump was kidding, we think, but who wouldn’t want to hear “Enter Sandman” and see Rivera, who will turn (gulp) 48 in November, take those first steps, do a quick skip at the warning track and trot to the mound again? Never mind that Rivera, baseball’s all-time saves leader, pretty much left it all on the field when he walked away in 2013. We can dream.

“Now is the time,” Rivera said in the spring of 2013. “I have given everything, and the time is almost ending. The thing that I have, the little gas I have left is everything for this year. After that, I’ll empty everything. There’s nothing left. I did everything, and I’m proud of it. That’s why it’s time.”"

3/26/1988, "New York Yankees manager Billy Martin, right, meets developer Donald Trump at Municipal Stadium in West Palm Beach Sat., March 26, 1988. Seated with Trump are his son Donald, 10, with a ball given him by Martin and George Steinbrenner during the game with the Montreal Expos.," AP, Drew. 7/4/13, "Born On The 4th Of July: 16 Photos Of George Steinbrenner," Huffington Post, Chris Greenberg